When Canadian Prime Minister Justin Trudeau was in Manila from Sunday, November 12 to Tuesday November 14 for the Association of Southeast Asian Nations (ASEAN) Summit, he captured everyone’s attention because of his good looks and his arrival in Manila getting into a food chain mingling with Filipinos.

Yes, his charm captured the hearts of many Filipinos but remember the containers full of garbage that was found in port of Manila few years back?

The 54-year-old politician blew into town like a public relations house on fire like a movie star but has also lost his charm when among leaders who came to visit the Philippines to join the 50th founding anniversary of the ASEAN , which the Philippines is the host and he dared to raise the issue of human rights to President Duterte.

In 2015, when Trudeau was in Manila to attend the APEC Economic Leader’s Meeting, the dumping of Canadian trash in the Philippines was not discussed in the bilateral meeting between President Benigno Aquino III and Canadian Prime Minister Justin Trudeau.

Instead of the garbage issue, the bilateral meeting focused on the relations of Canada and the Philippines.

And now, in 2017, he could only say that the garbage can only be “theoretically” returned, but still wouldn’t because of legal issues.

This is despite calls of environmentalists for the Western country to finally take back its garbage, Trudeau still did not commit to do it.

And now, the real issue came in. Remember in social media and on Canadian agencies, there was a time that jobs in Canada is in demand?

Jojo Robles, columnist for Manila Standard Today and RCM’s Opinion Writer of the Year revealed that the reason behind the Aquino administration has taken for granted the garbage from Canada is for the reason of giving job to the Filipinos.

MORE GARBAGE: The Noynoy government promised to keep quiet on the Canadian garbage issue in exchange for giving 500 jobs to Filipino nurses in Canada.

It’s true: the deal was 106 container vans of trash for 500 nurse positions.

And the Department of Foreign Affairs shut down the House investigation being conducted at the time, upon the direct orders of Aquino.

1. Is the garbage-for-nurses deal the reason why Justin Trudeau said there were “legal problems” with repatriating the trash to Canada?

2. Who is behind Chronix, the importer of the Canadian garbage? Is it true that the principals are close to the Aquino administration?

3. Why was a portion of the trash buried in Tarlac, of all places? Is it true that all of it would have been buried there, in Aquino’s home province, if the Tarlac provincial government didn’t protest?

4. Is it true that the garbage is now in Subic, after it was brought there when Tarlac province refused it?

Start the investigation of this smelly deal now. I promise it will lead to a guy who just posted bail.

Diana Figueroa, president of the Coalition of Concerned Citizens of Bamban, said the disposal was “kept a secret.”  Canadian trash ends up in President’s backyard. 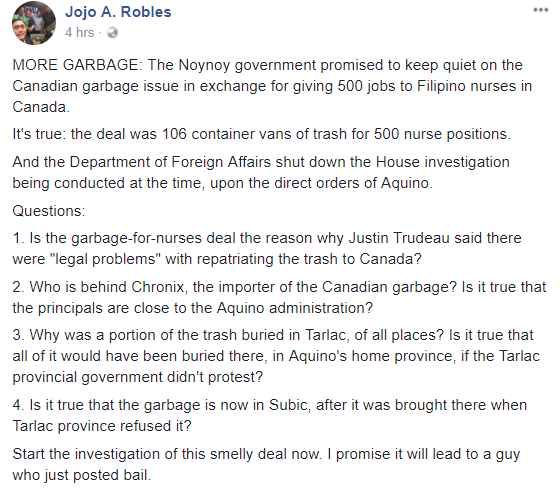