It is already well-known that President Duterte’s popularity goes beyond the shores of the Philippines, but one politician in Taiwan has taken this admiration to a notch higher.

A politician from Hualien, Taiwan is using President Duterte’s photo alongside with him in his campaign ad to stress his platform against illegal drugs.

Facebook user Nieviv Sucuaje uploads another photo to prove that the photo was indeed taken in Taiwan.

Taiwan’s local elections is in November 2018.

Known for its hardline approach in combatting corruption, crime and illegal drugs, Duterte cultivated a formidable admiration and support not only in his home country but also in neighbouring countries.

Observers even suggest that Duterte’s popularity rivals that of Putin and even Indonesian President Joko Widodo is following Duterte’s playbook in his war on drugs in his own country.

“This image is significant in more ways than one. First. The world is now accepting and admiring how our president is handling the drug problem, so much so that politicians from other countries are using PRRD’s image to get votes. Hindi lang siya effective sa Pilipinas, it seems even sa Taiwan.

The second and more important angle here is that PRRD’s image is being used positively in Taiwan – a country that is technically considered a rebel province by China. You would expect them to ridicule PRRD who is known to be close to the mainland government. Apparently there are those in the rebel state that thinks it is actually worthwhile to use the image of a character closely linked to that of their enemy – China. This is indeed a testament to the popularity and charisma of this old mayor from the province.”

This is something that has never been seen anywhere else in the world.

Filipinos must be so proud of their President. 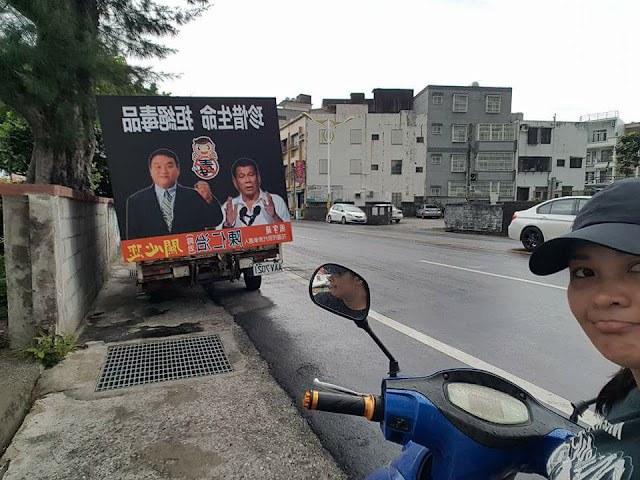 Trillanes currently in Washington DC, painting a negative image of our country