“The victim is now in the hospital. He suffered multiple nose fractures and requires surgery. 2 days na pala since the incident happened. The victim apparently hid the incident from his parents because of fear. The victim explained that it was just a basketball accident. But because the viral video came out yesterday, it was only recently na nagpunta sa hospital”.
“I am posting this so that we as members of Atenista might get a picture of the deeper physical damage suffered by the victim. He suffered in silence because of fear. Now there is also emotional and psychological damage”.
Is he the only victim? Can the other victims please also speak up and come out?

A post was made by a certain Hermenegildo Dumlao II who is according to his Facebook profile a resident of Quezon City.

Though unverified yet,  the said post is now being shared online which drew mixed reactions from the netizens. 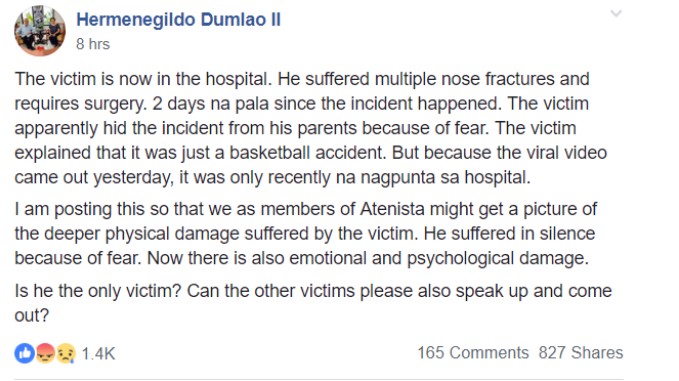 It is disturbing that bullying victims fear telling even their parents about their plight. Is this a sign of a really deep social problem afflicting elite private schools that we are only beginning to understand?

Kuwait Government Demands not to Renew the Employment of Filipinos both DH & Civil...