Days ago, news about the P6 Billion worth of payment for the unpaid taxes by the Philippine Airlines (PAL) proliferated. This particular achievement under the governance of President Rodrigo Duterte is more than enough to justify that the administration is working effectively and efficiently towards the betterment of the country and the welfare of the Filipino citizenry.

More importantly, the Bureau of Internal Revenue (BIR) through its officer Teodoro Pancho, revealed that the government is bound to collect more than P100 Billion worth of unpaid taxes from huge business corporations and organizations. One of which is the controversial Hacienda Luisita Inc.

This fact has been exposed by Eric Clark Su who, in his recently published Facebook post, nitpicked on certain historocal accounts related to the Hacienda Luisita controversy.

Quoting Pancho’s statement, Su pointed out that Hacienda Luisita Inc. has long failed to pay taxes to the government starting from 1986 when Cory Aquino assumed presidency.

“Pancho said BIR is expected to collect at least ₱27.3 billion this year and the big part of it will be collected from the controversial Hacienda Luisita Inc., which has not been paying taxes since 1986 – the year former President Corazon “Cory” Aquino took over the Malacañang palace. The 6k+ hectare plantation id owned by the Cojuanco-Aquino family.” Su added supplementally.

With utmost desire to give his readers an on pointam and relative background of the Hacienda Luisita issue, Su wrote elaborately:

“Hacienda Luisita is a sugar plantation located in the province of Tarlac, Philippines, that was bought by the Cojuangco family from the Compañía General de Tabacos de Filipinas.

The hacienda spans various municipalities in the province, including the capital Tarlac City. The estate’s incorporators, who control 70 percent of Hacienda Luisita’s stock shares, are Pedro Cojuangco, the children of Josephine C. Reyes, Teresita C. Lopa’s heirs, José Cojuangco, Jr., and María Paz C. Teopaco, all siblings of the late former President Corazón C. Aquino who, on the day she became President of the Philippines, bequeathed her shares to her children and the Daughters of Charity and other non-profit organizations for fear that it would be used as political propaganda.

The remaining 30 percent of the stock shares was given to farm workers under the Comprehensive Agrarian Reform Program’s stock distribution option scheme.” Su ended informatively. 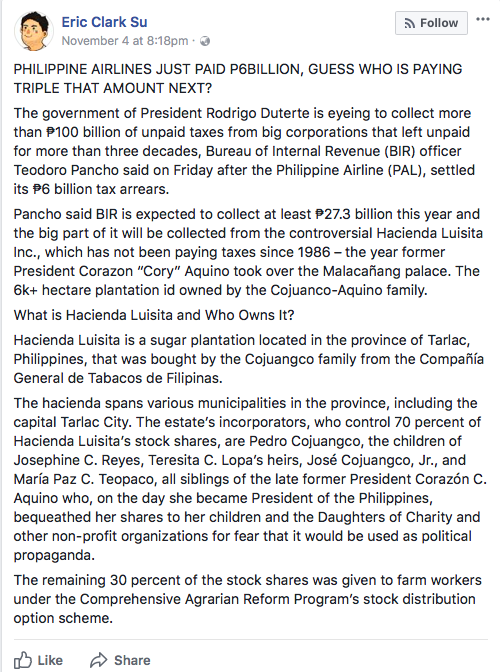 Look: SMC is scaling up its use of recycled plastics as fuel substitutes

Duterte junks US offer of support for AFP modernization