Some Filipinos tend to call me a Communist because I propose for a disciplinarian government and that I applaud Singapore as one model for progress. Aside from my posts on having a well-balanced economy — I would also propose it’s time for the Philippines to really learn discipline.

I would like to address the fact that the Philippines cannot really expect progress unless people first learn to follow guidelines. If you observe day by day, a lot of Filipinos do not practice any discipline. Do observe how many of them just throw their garbage anywhere in contrast to those who throw their garbage in the right places. You can see how reckless driving is a very rampant no thanks to loose traffic enforcement.

Go to the government office and you can see people who refuse to line up properly and workers who refuse to do their properly. In short, it’s all a result of not following guidelines.

In the Philippines, the problem is that majority of the people are stupid people who think they are smart and the smart ones who are frequently put down by the stupid people. I have experienced it that whenever I try to post an intellectual post and quote intellectual people, they say I am stupid and that the people I quote are stupid. It’s incredibly funny on how people who call me stupid may turn out to be high school dropouts and losers in life.

The Philippine version of democracy as of late is best called a government by stupid people, for stupid people and of stupid people. The result is you get a government that buys the people, poor the people and off the people. Because whoever is voted is the winner no matter how stupid he or she is – that person gets the seat in power. Last 2010, President Benigno Simeon “Nobita” Cojuangco Aquino III won not by cheating but because people willfully supported him.

During the 1998 election, Joseph “Sherap” Ejercito Estrada also won because people wanted him even if he is also another numbskull. Nobody wants an intellectual president like Gilberto Teodoro or Richard Gordon but only those that appeal to their stupidity. When you think about it majority of the Filipino people are to blame for bad politics.

Any good authority figure will do what is right for the country even if the whole country will turn against him. The problem with the Philippines is that most of the politicians are bootlickers and crowd-pleasers. When people continue to want economic overprotectionism the government is most likely to give it instead of weighing the consequences for the long run, such people only think of the economics for the short run. The same goes for why squatters are getting their rights to squat – it’s no thanks that most people in the Philippines choose to be squatter-brained and that they support squatters as merely “informal settlers” when in fact they are a serious problem.

When a good leader does not obey the voice of a majority decision that makes a country go bad it’s not that he is a dictator but a people who truly cares about accountability and responsibility. 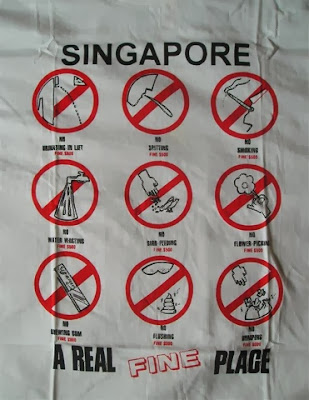 If the government starts implementing policies that make the Philippines a real fine country like making civil offenses like those misdeeds mentioned above, just think how many progress will happen. Just think what if people got also fined for littering, vandalism, wasting water, public smoking and the like? I would really think that it discourages bad behavior as it should be discouraged.

I am not saying that the current constitution should criminalize everything like lock people up for littering garbage anywhere or spitting in public but rather, fining them would at least be a reminder. Jailing should be done for habitual civil offenses but not to be locked up with people who did criminal offenses. I could care less what idiots like Etta Rosales will have to say about discipline because they are a bunch of idiots who don’t uphold human rights but only a culture of impunity. Learning to follow simple guidelines is indeed a real straight road to progress and not the stupid Pwede Na Yan system. 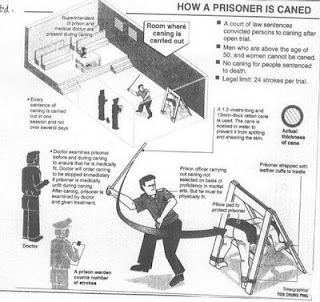 I also suggest it’s time the Philippines should really practice caning by different degrees depending on the punishment. Having been spanked whenever I am naughty as a child has helped me become a more decent person in the future.

The stupid DepEd officers should really consider why discipline is so bad in the DepEd schools and in so many public schools where school fights are becoming the norm. The statement is, “Spare the rod, spoil the child.” and that’s what a lot of Filipinos are lacking now, the rod of correction to be whacked at the seat of education. The constitution should really stop its softie behavior, oh I’m the poor victim view and instead cater to what most Filipinos lack and that is discipline.

I don’t care of the United Nations, European Union or any of those sissy international meddlers say that caning is wrong. When caning is done right and according to proper medical procedures and preservation of human dignity then it’s not abuse since it does not mutilate or cause permanent harm to the person.

How do I propose the proper use of caning as a form of discipline for wayward people? A teacher’s stick can be used in schools and should only be whacked on clothed buttocks and the number of strokes should be delivered just enough to register a hard lesson on the person’s head. Just think if people were spanked for disobedience, they would learn to obey. I would suggest that depending on the offense, the caning will either be done privately but if they did a public scandal, cane them openly.

If more people got spanked when they do what is wrong they are most likely going to get that lesson registered into their heads. If those people who hate discipline will kill themselves when caning gets implemented then the Philippines may just be one step to better progress. Sometimes a high suicide rate might be good for a country if those who committed suicide were just liabilities who did nothing but cause trouble.

Not to mention, the government should really start a program where both parents and teachers should be re-oriented about the new face of Filipino society.

If parents and teachers were made to realize that discipline and good character will save their children and students from government caning, then just think how orderly society will be. It’s time to really draw a line between discipline and dictatorship, discipline and child abuse and discipline and Communism. People may say I am a Communist or despotic madman for writing this post but that’s because they hate rules and refuse to differentiate Communism from disciplinary governance.

Another UP grad-turned NPA surrenders to military

Duterte administration to collect more than P100 Billion worth of taxes from Hacienda Luisita...